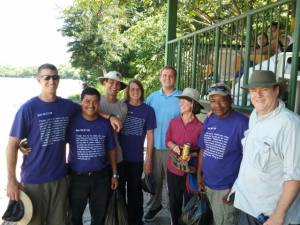 Hello all!  Thank you so much for your prayers for our trip up the river!  We had a great trip, intense at times of course, but a great trip!  The environment was the most difficult to handle, battling the elements and illness at the same time is tough.  But Jesus sustained us all!  We delivered Bibles to five different communities including Walakitang, we delivered “Proclaimers” (audio solar powered N.T.s in Miskito) in three villages, Chris had the opportunity to preach in Walakitang, we took communion with the church, we delivered relief packs of food, clothes and dental products,  we visited homes praying for people and sharing the Gospel, and every night we showed movies in the different villages.  God was with us, we are very greatful!  Here are some of the pictures from the trip. 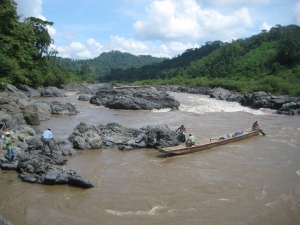 This is a serious rapid that divides the East and West of the Rio Coco…it is called Kibras.  If you miscalculate and go right it is a deadly rapid (110 deaths), but to the Left is clear.  We traveled past here for the first time to visit Siksiaris & Linda Vista.

Shot of one of the days on the river, if you can get past the pounding sun or pouring rain, some of the sights along the Rio Coco are really amazing.

This is in a town called Raiti.  It is a bridge that needs repair, a few of those planks were really rotted.  But right after we passed, some locals shot through with 100lbs sacks of rice on their backs…they definitely knew where to step!

Just after daybreak on our trip home.  We got onto the river before sunrise so we could make the trip in one day.  We left Walakitang at 4:45 am  got to Wiwili at 6:00 pm.  It was so worth it not to have to set up hammocks one more time.

Here are those hammocks I mentioned.  Setting up and breaking camp and praying all night your rope doesn’t snap makes for some light sleeping! 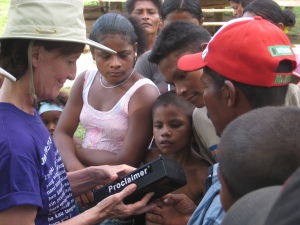 The “Proclaimer” was awesome.  I swear they have James Earl Jones reading on that thing.  It is solar powered and has a crank power source too.  It booms with sound and to hear God’s Word so loud and bold in the Miskito language was one of those things that almost makes you stop in your steps. 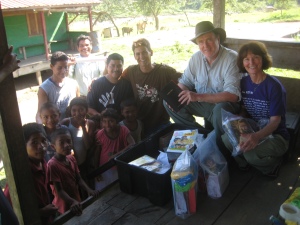 Pattie & Chris Ward supplied 12 full Bibles, 40 NTs, 40 Gospels of Luke, a bible study in John, 12 children’s bible stories, and other Biblical material ALL IN THE MISKITO LANGUAGE!  Here we are opening the supplies….It was awesome! 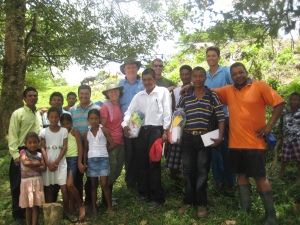 Here we are in Lakusta delivering the Bibles and Tshirts with scripture on it to the Pastor there named Luis.

We made a trip to stay a night in Siksiaris, and then made a trip further down the river to Linda Vista to deliver Bibles as well.  Here we are gathered listening to the Proclaimer in Linda Vista.

We had huge crowds in the evenings….here is Brinson setting up the movie.  We showed the Jesus Film in Miskito, some cartoons for kids, Finding Nemo for the kids too, and The Ten Commandments with Charleton Heston (in spanish)…who’d a thunk it!!! 🙂

Another fun thing Patty brought were games for the kids…this also brought a big crowd.  With simple hooks on the wall, writing a point value above each hook, a few rubber rings and you have the whole community in a game of ring toss!!!

We also were able to bring some extra food and some supplies to make care packages for all the church members in Walakitang and the most needy of the community.  We had rice, beans, oil, clothes, toothbrushes and toothpaste.  It wasn’t much, but everyone was very very very excited to receive a package!

We had a wonderful time with Pastor Victor and his wife Damaris during this visit.  Their daughter Kendi (in the picture with them below) reminded me of Isabella the whole time…which helped me as I missed Krista and our kids very much being away for so long.

It was nice to be in Walakitang for an extended period of time and be with Victor and the other church members, hearing their stories, praying for their families, taking communion togther, worshiping together….it was a great time.  Please keep praying for Victor and his family and for the church in Walakitang!  There is a picture of the church building…the members are going to start making blocks to try and get some solid walls up.  We hope to provide bags of concrete at some point in the near future.

AGAIN THANK YOU ALL SO MUCH FOR ALL OF YOUR PRAYERS….WE HOPE TO ADD OTHER PICTURES LATER, THESE WERE ONLY THE PICTURES OFF OF MY CAMERA.  WE HOPE YOU ARE ENCOURAGED THAT YOUR PRAYERS WERE ANSWERED AND GOD DID THINGS THIS TRIP THAT WILL HAVE A LASTING IMPACT FOR HIS KINGDOM!!!

Bonus pictures:  When they slaughter a cow in Walakitang they get out the scale and people come and buy the meat right away.  We bought a few pounds for our meals, mostly for those hosting us, because as you can see by the pictures….it was certainly not sanitary!  You can see that one girl got a steal, she got both legs and her little brother was following with a bag of meat.  It was quite the sight to see!!!

GOLD…all along the river there are Miskito people panning for gold.  For most it is their only source of income.  We passed this woman as we were passing the rapid at Kibras.  If you click the picture and zoom into the middle of pan you can see the gold.  She has probably been there for a number of days.  Each point (10 to make a gram) earns her a little over $3.  Pretty intense way to make a living, but at least there is something  of resource along the Rio Coco.  Can’t get much better than Gold right?!?  We saw dozens of people panning as we traveled.  The Miskito people have all the rights to the gold in this region.

← Trip up the River…Please Pray!
Pretty funny!….Chris on the O’reilly Factor…. →

One Comment on “Back in the big city…..Great trip to Walakitang!”