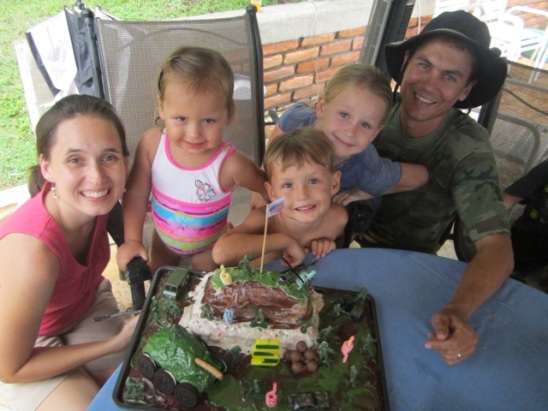 Our son is five now!  He is officially a soldier 🙂  Krista had the great idea to have an Army Birthday Party for Mason.  He loves playing soldiers, it is pretty awesome.  He will sit quietly for hours in his own little world….yes every parent’s dream right!?!

So Krista made an awesome Army cake and we had a party with the Army theme.  We created a cool obstacle course for all the kids involved to run through and at the end of the course they became soldiers!!!  Woohoooo!!!  Chris was the drill sergeant, Sir Yes Sir!!!  They had to scale jungle gyms, throw grenades at bad guys (Uncles Mosey & Brinson), maneuver a ropes section, and slide into a giant Football at the end, why a giant football you may ask….because when you have a giant inflatable football, you gotta use it!!!  We even cooked hotdogs on a fire in the spirit of football season…..lots of good football last weekend…Go Canes!  Go Noles!

It was lots of fun to celebrate Mason.  He is such an easy going little guy, always pays attention to his sisters if they need something or something is going wrong he helps them….it is fun having him getting to the age where we can go out and throw a ball or kick a ball with him….he really is a great little guy!