This is the end of the school year in Nicaragua.  We’ve been going to a bunch of graduations and end of the year Christmas parties this last week.  It is pretty exciting down here this time of year.  The year ends and so does everything else, the big two month vacation falls over December and January as well.  This is because it is not snowy, cold and dark like most parts of the U.S. so people enjoy themselves.  It is a nice time of year.

We had two graduates from Casa Robles.  Both special stories and I wanted to take some time and share them with you.  First we have Marcos who just graduated from Middle School into High School.  It is a very very very encouraging to see where Marcos is.  He has been with us for almost the entire five year existence of Casa Robles.  Out of all the boys he had and even still has La Chureca in him the most.  He was older, he remembers things, he knows how to haggle and even panhandle.  If you think of one of the little half naked kids running around down there, that was Marcos five years ago.

What you see now is a boy starting to become a young man.  He struggles to behave himself at school, but his fire is actually fun to be around.  As the Lord gets a hold of him and harnesses this little man…well Nicaragua will be changed for the better.  He is so little compared to all his classmates, but I am pretty sure he thinks he is as tall as all of them…and he will catch up.  His mom and grandmother came to graduation which meant alot to him.  They are in and out, here and there, and still not able to provide safety for him and his lil’ bro Denis, but they were very proud this day.  He looked sharp…we were all very proud too.  Praise God!  Please keep praying for Marcos. 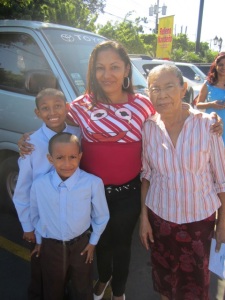 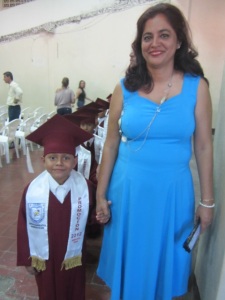 If you have followed our blog you will remember Andrew who had surgery earlier this year to remove the large tumor from his leg.  Well talk about remarkable.  Andrew graduated from preschool and he was number one in his class!  He got a special medal, he gave the opening words of gratitude to the entire auditorium, and got a special sash placed over his shoulders….stinkin’ Awesome!  It was a moment of great pride for all of us!  But especially Mama Angelica and Papa Yuri….all the work, all the effort, all the sacrifice…to see one of their lil’ guys up there being honored was really something remarkable.  Sometimes it is funny how big of a deal a kindergarten graduation is made into down here in Nicaragua,  I mean these little guys are fully decked out in all the regalia.  Maybe they do this in the States too, I don’t know?  But, being there for Andrew’s was something really special.

Andrew also had another very special guest.  As we sat through Marcos’ graduation in the morning and then went out to lunch together he told Krista that he was very excited because his mom was going to come to his graduation.  Andrew and Hayler’s mom has been in prison for the three years they have been with us at Casa Robles.  We visited her several times and it was always pretty hard for them, and for her too.  Well she was released last month and has told us how she is going to try and get back on her feet…she is so thankful for what Casa Robles has meant for her sons.  Well, she definitely made it to graduation.  She came with the boys grandmother too.  As Andrew stood there and recited his little speech from memory, she was a wreck as you can imagine.  She turned to Krista and told her, “I am not upset, I am so happy, so proud, these are tears of joy.”  Amen.  Again Praise Jesus for what he is doing!  Please keep praying for Andrew. 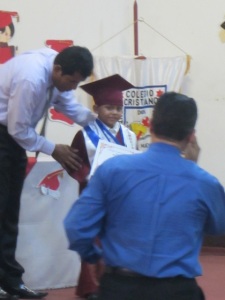 Here are some bonus pictures of the boys who made the Honor Roll for the year….can you believe they made the wall of fame?!?!  Awesome!!! 🙂  Fredder, Heyler, Denis and Andrew all got their names on this special bulletin board in the courtyard! 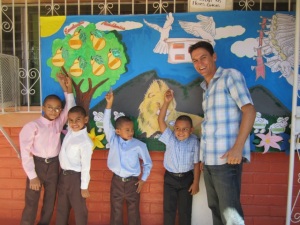 If you would like to make a donation to help keep Casa Robles going in 2013 please visit the link below.  There are options for sending checks or using paypal.

Thank you for all of your prayers and support!