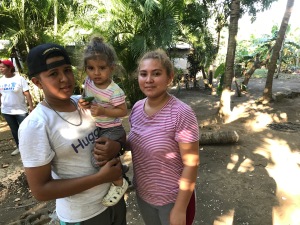 This is Daiyton, Faviana and Camila…last Monday they received a home built by a group of high school students from Westminster Christian School in Miami, FL.  There is a back story and it is beautiful.  Faviana heard about our Mercy Home ministry from a family that had received a home two years ago.  They told her to drop a letter off at the gate to share her situation.  Well Faviana decided to drop a letter off…ever week…for a over a year!  We would sometimes see her at the gate when we were taking Juliette to school, often with Camila (who is probably the cutest 2 year old in Nicaragua).  She was always very kind and would give her letter to us and be on her way.  She persisted for her family, and she told us later about her constant prayers asking God to provide.  Well when it came time for Westminster to build, we visited Faviana to see their situation and everything checked out perfectly…so it was time to build!

Faviana told Krista a sweet detail about the timing of the construction.  We have to do some prep work before the team arrives so that we can finish the house during the trip.  One day a couple weeks before the team Faviana and Dayton were sitting at her mother’s home where they lived in a single room.  They heard trucks on the drive and saw the construction materials were arriving!  They were so excited and the sweet part was that it was Camila’s birthday.  On her second birthday God was moving and construction was starting on her families home!  The house she will grow up in, and probably see her family grow in.  Isn’t that awesome?  I think so…Amen!

The team worked hard all week long!  There was lots of action as you can see in the video above and we are happy to report that there were no major injuries LOL!  When you are in a community for a week building a home, there is a chance to meet families and neighbors and build friendships.  Lots of little cousins, nieces and neighbors came by and stole the hearts of so many in the group.  It was a world view changer for the teens, and it was a week that totally blessed this neighborhood, not just the family we built for!

On dedication day it was special to look into the window and see the team praying over the house before they brought all the furniture in.  This home was not just a house made of bricks, it is holy ground.  We learned from Daiyton and Faviana about what had happened on that exact spot where we build their house.  Three years ago they were married right there on that spot in front of their family and their church family.  Two years ago the church gathered together on this same spot and prayed for the land to be a place where they could raise their family.  And then this year we prayed over Daiyton Faviana and Camila as we dedicated their new home!  Holy Ground.  That is our prayer, that for this young family and anyone who visits, that they would get a touch from God even as they enter the front door!

It was an incredible week, Praise God for that!  A couple of days after the team left the window and the doors were installed, and in the coming days the family is going to use the construction materials that were left for them to make additions that they decide.  These homes are something that would take about 7 years for a family to save materials and build….we love that God makes it happen in about three weeks!  Amen again!