Aliyah’s kindergarten school puts on a big show for all of the parents to celebrate Mothers Day at the end of May.  They practice their dances for months and then do a big show….I imagine it is similar to ones in the states.  Aliyah’s group sang “We All Live In a Yellow Submarine” in English.  It was  really cute, and actually funny to hear Aliyah sing in English with a Spanish accent….her English teacher speaks English as her second language so she has an accent….so Aliyah sang with an accent! hahaha!

Her second dance act was doing a dance to the Shakira song from the World Cup last year called “Waka Waka”.  Aliyah had all her moves down and didn’t miss a beat…..she’s got the ritmo! 🙂 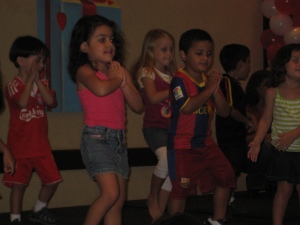