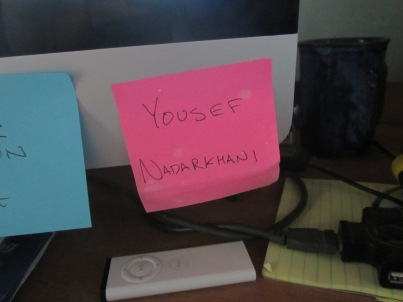 This sticky note has been on our computer for nearly a year now.  When we first heard the story of Youcef Nadarkhani we began to pray for him.  Our kids all prayed for him too….almost every night one of them would remember him.  We would always hear the Buzbee kids talking about him too and how he was in jail just because he was a Christian….Aliyah would always tell us Hazel is praying for pastor Joseph.

Praise God he is free from prison now!!!

He wrote a letter of thanks that can be viewed here in full…very encouraging!

Youcef Nadarkhani was jailed only because of his Christian faith and nothing else.  His family heritage was Muslim so since he left the religion of Islam he was considered an Apostate by the Iranian Regime and the sentence for Apostasy is death.

We are going to leave the sticky note up and keep praying.