Before blogging we want to mention the Tornadoes hitting Arkansas and Oklahoma…we are praying for our friends in those states and for everyone affected.  We can’t get up there to help, but we will keep praying!

We are now about three weeks into a constant “Extreme Red Alert” Earthquake advisory.  It is something totally new for us living here, but I think the country is taking all of the precautions necessary to avoid having people in unsafe places if a large earthquake follows all the big ones we had about two weeks ago.

Here is a Nicaragua Government website that shows the different tremors and earthquakes.  http://www.ineter.gob.ni/

How has this affected people’s lives?  This week we decided it was time to move our kids back to their rooms at night, and it seems that most people have decided to
return inside as opposed to sleeping outside on porches.  We only slept outside for two nights before deciding to sleep close to the door instead….earthquakes wake you up pretty quick.  As long as we were together we felt safe.

School was cancelled last week and this week the government has closed all schools again.  This is probably the biggest affect the earthquakes have had on everyone.  Our one week Easter vacation (Semana Santa) has turned into three weeks!  Most all businesses remain open however, which is great news.  The schools closing is mainly for safety concerns, having large numbers of kids in classrooms would be very dangerous if a large earthquake hit.

We are so thankful to all who have been praying for our families and for all of Nicaragua.  Though it has been a time of living a bit on edge, everything has gone smoothly and we are all very thankful to not have had anymore big ones! 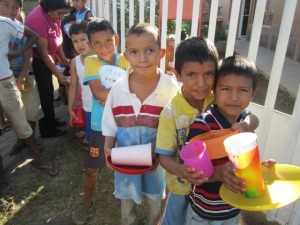 How has this affected our ministry locations?  At Club Cristiana La Esperanza school is cancelled as well and we have also suspended all of the tutoring and sports programs.  We have kept the feeding program open daily, so all of the students have come by and visited and had lunch. Our teachers and staff have been on site making necessary plans with the Ministry of Education for evacuation and safety.

Casa Havilah & Casa Robles are all doing well.  It has been stressful as you can imagine with a so many kids at each home.  Krista asked Angelica how she was doing the other day and she said “tired…tired of sleeping outside with seven kids!”  So again we are thankful there hasn’t been anymore large activity, and are praying it is done.  School is out which leaves alot of free time.  So, today they are all coming over to swim in the pool and have lunch, and then watch Real Madrid play Bayern Munich in the semifinals of the UEFA Champions League….Marcos & Freder are huge Madrid fans, everyone else is for Barcelona who already lost 🙂

At the Imagine Ministry Center in Los Brasiles the situation is probably the worst as far as Earth quake affects.  The Center is in suspension mode with the rest of the country as far as activities.  I know having visited out there that people are very upset with the earthquake situation as they were probably the most affected of the whole nation.  (on that map in the link above Los Brasiles is right near the lake buy all the yellow dots).

Was their any serious damage?  We are very thankful that our families homes had no major damage.  We just have some surface cracks in plaster and some small cracks on porches.  Both Casa Havilah & Robles homes also have no visible damage, which we are very grateful for!

By far the worst damage was out in Los Brasiles in the neighborhood surrounding the Imagine Ministry Center.  We saw at least a half dozen homes where walls had fallen down and then at least another dozen homes with damage that makes them unsafe to live in.  The program director Lisette also had damage to her family’s home, some major cracks in walls from floor to ceiling.  Then, at the ministry center itself there is some damage to walls and large cracks in the flooring.  As I mentioned, this area has been hardest hit.  Here are some pictures of the damage.  It was very sad to see.  In a moment praying with one of the families, I felt the Lord saying that He wasn’t going to forget them, He will take care of them.  Amen!

Can you help?  Lissette has said that there is some work underway by the government in Los Brasiles.  Also in the near future we will have some teams going out and coordinating through Lissette to help some of the families that still have needs.  But if you would like to pursue more information please email Coburn & Melissa at imagineministry@gmail.com  And please keep all of the people there in your prayers.

We are all thankful for your continued prayers.  Our hope is that the activity will stop soon and the government will lift the “alerta roja extrema” so that everyone can return to school and work.  Amen.